The Quintessence is one of five platonic solids regarded by the ancient western science of Greece to be the building blocks of existence. Quint Essentia is Latin meaning fifth element which according to philosophers such as Plato was the element of the heavens, knowledge, health, and all living things, whereas the other four elements were the more tangible substances such as earth, air, water, or fire. The common four elements were said to follow the paths of straight lines, whereas the 5th was proposed to travel only in great circles, causing the cyclical patterns in the seasons, life, and the heavens.

The shape of the quintessence was the dodecahedron, a ten sided spherical shape where all sides were pentagrams. The pentagram and a ratio found within the proportions of the pentagram often called the Golden Ratio or Phi (similar to Pi being found in the circle) was discovered frequently in nature from the spiral patterns of sea snails, to the centers of apples.

This overwhelming evidence for the existence of quintessence helped the pseudo-science survive for several millennia, casting shadows in our culture in words such as quintessential, in the story of Eve eating the apple of knowledge, and even in the way that we draw the shape of a star. The idea of quintessence survived in physics as late as the early 20th century known as the Aether, and was shown not to exist by Albert Einsteins Relativity theories.

The apple section shown in this piece demonstrates clearly the proportions found within its core. The entire piece is constructed in the proportions of the Golden Ratio and features Eve holding the apple at one nodal point of the spiral pattern with the other apple centered on an opposite nodal point. 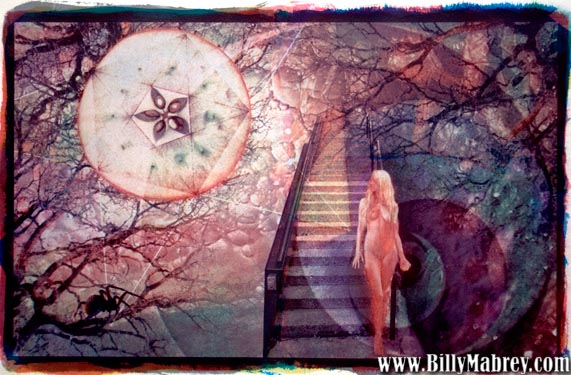